Goodbye Good Blog Celebration: It's better outdoors! One Year Celebration with YOU!

One Year Celebration with YOU!

One Year Celebration with YOU!

We started this magazine on an idea and the goodwill of generous and accomplished contributors. With this issue, we acknowledge the successful end of our first year!

This magazine was instrumental in the Natural Products New Zealand award that we won in March 2012, where we were recognized with the James and Wells Intellectual Property Excellence in Marketing Award. We won in a billion dollar industry with entries from businesses far larger than ours… many with an actual marketing ‘department’, which for Goodbye Sandfly, consists of me on a Monday. I think we won because what we’re doing is more about creativity, enthusiasm, and education than it is about our product. In my acceptance speech I said that when you treat customers as family, it comes back to you in ways that cannot be measured by a financial statement but are infinitely valuable to everyone. So, I thank you, our family, all of you, thank you.

In this post I combine gardening with one of my own lessons in emotional intelligence, pretty tricky, huh? In Check it Out, we’ve got seeds lovingly collected by little hands to give away to you. And Check it Out Too is an outline of an interview coming up next week that is available for you to access either live or for 48 hours afterwards.

I have loved the comments and interaction with you over the last year. Would you share with me your favourite issue? The link is at the bottom of this issue. Or you can tell me with the seeds e-mail in Check it Out. 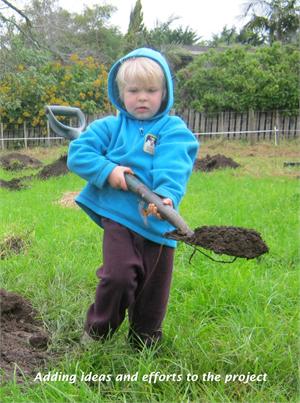 I love this time of the year, with all the promise of a new garden. I like planting seeds as much as the actual harvesting of food that we’ve grown.

I am not new to gardening with kids. I have witnessed two entire seasons where every green strawberry was systematically stripped and consumed. I dealt with the season that all seedling markers were removed. I have watched lettuce seedlings buried head down, plants pulled up, and seeds buried far, far underground. But watching the kids forage is a delight. They know the plants, can scout a good cherry tomato, clear the snow peas in a sitting, and even pull up carrots. Most everything is consumed directly on site, still warm and essentially unwashed.

Today as we were planting bean seeds (good size for little fingers, one tray for each child- own seed packet each) a loud and highly energized debate sprung up around the outraged four-year-old’s desire to not have eight-year-old help him water his seeds. Both four and eight-year-olds defended their corners staunchly. Both behaved quite badly. And both were right. Problem was I felt annoyed, and I mean really upset. I walked away, banned them from the kitchen while I prepared dinner. When I did call them to dinner- I asked them WHY do you have to act so horribly when we were doing such an amazing, magic thing planting seeds?

For the consciously minded of you, you’ll spot two big gaps. First, WHY is not a high quality question. Better questions for moving forward are How or What. Second, I myself was acting horribly. Indeed.

I had no idea what the lesson was to be learned, but it was clear there was one. So I sat and talked to the moon and stars. I told them how I felt, I asked some how and what questions. I stated that I was ready to do something new. And then I realized that all of us wanted the same thing, Happy Family Gardening, just different versions. And all of us responded the same way when we did not get what we wanted… a howl!

Of course, the kids were territorial and scrappy, we were dealing with seeds and water! They understood the magic and wanted it to be as perfect as they pictured it, just as I did. Then, I felt lighter. I laughed at Crazy Family Gardening and understood that it would indeed happen again. Just like Happy Family Pancake Morning often degrades into who gets to stir the mix first.

I get it, just now. Acceptance is fundamental to living in the moment. I cannot live in the moment if I create myths of how it should be. So, I’ve exposed another fantasy. They are not so hard to let go, once identified. The trick is seeing them in the first place. I’ll let you know how I go next time around. Here’s to gardening, however it comes.

You guys know me! I’m the one who wakes up at night thinking about what I want to discover and create next. My children, John, Goodbye Sandfly, and Mind of a Guide keep me fully engaged in a work of bringing forward the best of myself and what I know. I believe in humanity, regardless of our displays of dysfunction. We can re-learn the truth about ourselves. We are natural beings, and we feel better when we acknowledge and live in tune with that truth. Put down your cell phone, pull up a sunset. There is joy to be discovered.

Check it Out- One Year Celebration!

I must celebrate our One Year birthday with my favourite thing: seeds.

Every year I have at least one extremely successful crop. Last summer the standouts were spaghetti squash, coriander, and my first ever swedes.

Eight spaghetti squash plants produced about 50 full-sized beautiful squash. We gave away heaps and have been eating one a week since February, saving the seeds from each one. (I paid the kids a cent for each seed, and learned that there are between 200 and 300 seeds in each squash- they are good counters when money is involved.) These squash were grown well away from all the other pumpkin types and should be true to seed! I’m not sure how many seed packets I’ll get, but lots, and I want to give them away to you.

We use Spaghetti Squash just like it sounds, as a pasta replacement, with yummy basil, feta, olive, and fresh tomatoes, or just a classic red sauce and parmesan. You bake it first for 25 minutes or so with some water, and just like pasta, you want ‘el dente’, so bake it less rather than more. Use a fork to separate out the fantastic strands into a large bowl or baking dish. One squash easily feeds our family of four.

What are you growing?

We belong outdoors is not sentimental, it's a statement of the beauty, healing, and power of nature. Nature is a critical ingredient to wholeness. I'm Becky Cashman, founder and product maker for Goodbye, as well as gardener, writer and sky watcher. Oh, and Mum, very important, that role. It is my honour to share a moment with you. If you are on a path to living a more natural, more considered life, join me and the community that we've become over the last twenty years of writing and sharing. There's a subscribe button at the bottom of the page.

It’s Time to Do Good

How to Soothe Sandfly Bites

The Sun shines not on us but in us. The Rivers flow not past, But through us.
- John Muir