Food When No-one is Watching

Food when No-one is Watching

It’s Wednesday following a whirlwind school holidays. Consider it done any relaxing and connecting that is meant to happen in that time. How about you?

John took the kids to Auckland in the first week, to Murray’s Bay Regatta. Murray’s Bay Sailing Club is home to Dean Barker, and has a sailing history of gold names from floor to ceiling. A Toyota film crew was at the regatta, and released this video during the Murray’s Bay racing. John and kids feature for one second. It’s been played in our house quite a few times this week. Seems to be the balm for America’s Cup. For those of you who know what I’m talking about, America’s Cup stopped our morning routine, caused Kerikeri traffic jams and a whole lot of kids late for school for the entire campaign, and then it was over. Sad.

During the Murray’s Bay Regatta, I stayed home. The day they left I cleaned the house, and it magically REMAINED tidy all week long. I worked long days, usually around 14 hours, one as long as 18, but they were relaxed. I listened to music. I drank a few cups of tea on the deck. I won’t lie to you, it was a great week. The business needed that kind of push, with our new products JUST about ready. I got three weeks of work done in one.

What really interested me about the week was the food. What do I eat when no one is watching? Well, I discovered that left to my own devices, I eat one main meal a day somewhere between 11am and 3pm. And that it was pretty much the same most days. I made a video to share one of those lunches with you.

Food is a huge topic at our house. For a variety of reasons, we are gluten-free (except when we go to parties). We eat sugar-free (except when we eat dark chocolate). We eat night-shade free (except when we grow our own tomatoes or make Moroccan Lamb). We have fresh, raw goat’s milk everyday. And other dairy slides in and out of our life depending on the kids constitution (run down, cough, cold, mucous?…. no butter, no cheese) In other words, we make our own way, unique to our family.

Food quality is a huge topic at our house too. Not just the WHAT, but the HOW.    Is it organic, fresh, local, unprocessed, in season, GMO-free, easily digested? We’ve found the best way to tick all of those boxes is to grow our own food. We compromise, of course, as we all do. Except on the GMO thing, John’s incredibly devoted to no GMO in our food.

If you are interested in the GMO issues for your own family, today’s main article is for you. I’ve never seen this type of event or support available before, and I’m delighted to be able to point you toward it.

All for now, wind-blown blossom. With love, Becky

As far as I’m concerned, the ultimate in “food when no one is watching” is unlabelled GMO. While we’re not able to watch, due to lack of labelling, corporations can make food-like substances, and continue the worlds largest unregulated experiment. With you and me as the test rats.

There’s a lot happening with GMO (Genetically Modified Organisms) at the moment. Washington State has a referendum that has attracted millions of dollars in corporate spending against mandatory labeling of GE foods. The campaign is fierce. And if last year’s failed California referendum is anything to go by, advertising dollars spent by companies like Monsanto, do spin the vote their way. Budget is not everything, especially as people become more educated, but it is powerful. Here’s to Washington State realizing a better result.

I make no attempt to cover this territory from the beginning. Last year, John wrote an incredibly thoughtful, researched article called GMO- What’s In it For You, which is a good starting place.

What is new this year is the amount of collaboration being done between various researchers, organisations and interested individuals. For the first time ever, The Food Revolution Network are sponsoring a GMO Mini Summit. Experts, interviews, all available to access between Oct 25 and 27. If you want a jump start on the issues for you and your family, join me for this event. I’ll be listening in too.

I have an unsteady peace cobbled between my computer life and the garden. Working from home allows me moments during the day to just lie on the ground, listening and feeling the profound generosity of the earth.

How can I assist her? She gives everything to me, my family, to you.

I aspire to live in integrity (thanks Cindy for bringing that word back to me), and yet, I know that my physical footprint is just as fierce as my neighbors’.

Lunch with Becky. This is a first. Don’t laugh at my kitchen editing!

I take you on a small tour of our property, while collecting and preparing my lunch (3 minutes)

The avocado is from a friend’s tree- thanks Cheryl!http://youtu.be/I8xORoXTl0A 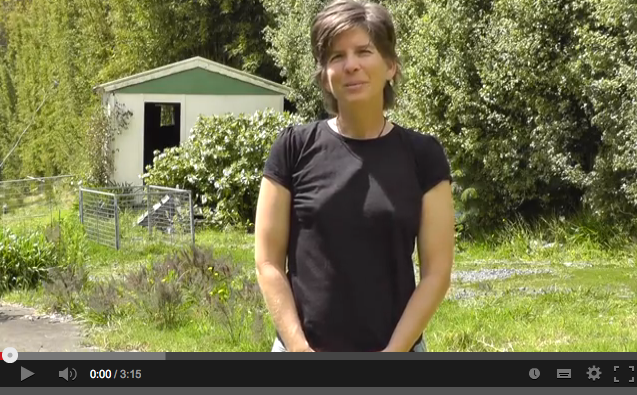 “Unless I missed it, you don’t mention anything about meat tenderizer. The simplest and most effective treatment for most bites is a salve made of meat tenderizer and water applied as soon as possible after the bite. I also think an oil based mix might be even more effective. At any rate papain, the active ingredient in meat tenderizer, an enzyme, beaks down the irritating proteins present in most insect/bites and greatly reduces the reaction. It’s a far better approach than creating a suicide cocktail of old wive’s tail ingredients and hoping one of them works.” Laurie

Becky’s comment: Obviously, not one of our fans… but raised a good point about the papain for bite soothing. I would not use a “meat tenderizer” but would go straight to the source either fresh papaya or fresh pineapple.

Outdoors is Good is not sentimental, it's a statement of the beauty, healing, and power of nature. Nature is a critical ingredient to wholeness. I'm Bex Cashman, founder and product maker for Goodbye, as well as gardener, writer and sky watcher. Oh, and Mum, very important, that role. It is my honour to share a moment with you.

Workhomeworkhome and then . . . Home. and Work.

The Sun shines not on us but in us. The Rivers flow not past, But through us.
- John Muir